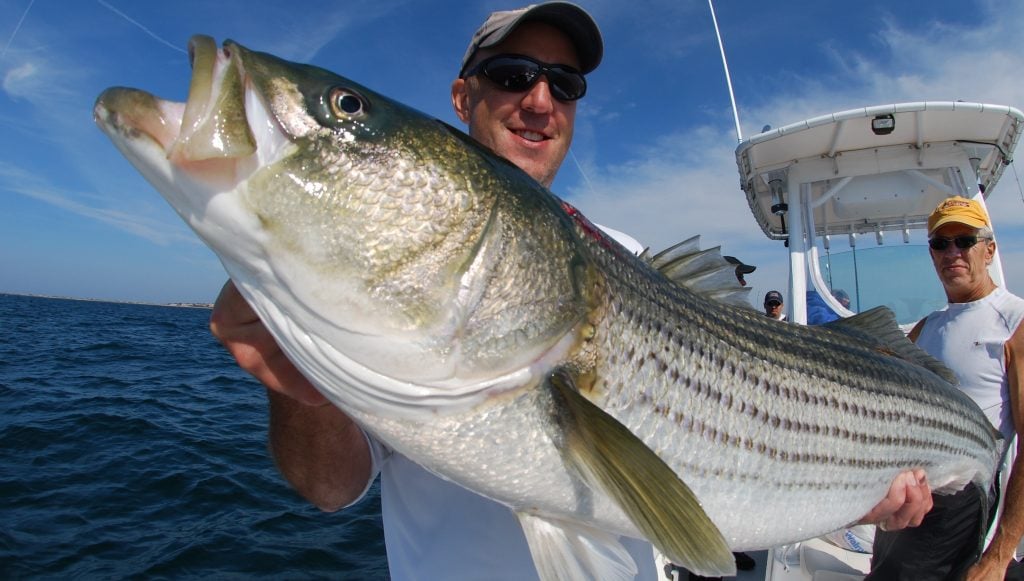 Note: The Raymarine Dragonfly 7 has been discontinued. Find all the newest Raymarine chartplotters, here, including chartplotter / fishfinder combos such as the Raymarine Element and Axiom Plus.

We’ve included all of these fishing electronics onto our online marine store, and just wanted to summarize the strengths of each one of them for you here. 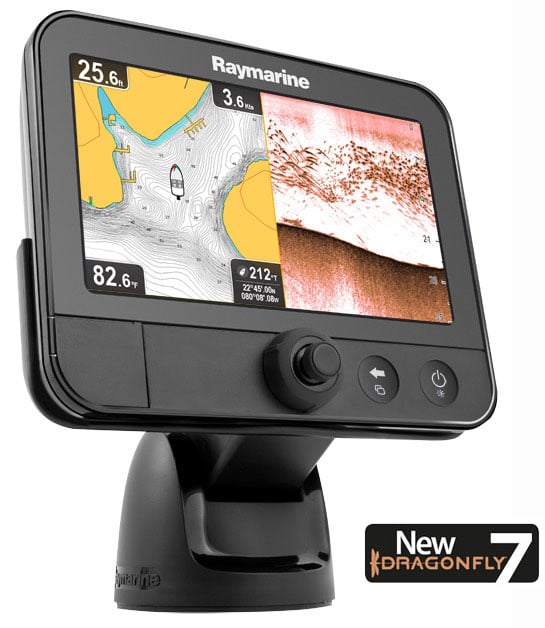 Depending on what brand you like best, if you’re a Raymarine guy, than you’ll love the new Raymarine Dragonfly 7 Pro.

The Dragonfly 7 Pro employs true wide spectrum CHIRP technology, making sure more sonar signals are transmitted into the water, allowing the fishfinder to interpret more detail, target more fish, and image structure with unmatched clarity. Dual-channel CHIRP will provide you with UltraWide Downvision, or a Fish-targeting sonar, providing photo-like images all the way down to 600 feet.

The optically-bonded LCD screen on your Raymarine Dragonfly 7 Pro will provide you with bright, crystal clear images, even in direct sunlight, and never fog up.

Stream sonar to the Navionics Boating app and enjoy live sonar on your phone or tablet as you create your own personal bathymetric chart. Easy-mounting allows you to place the Raymarine Dragonfly wherever you’d like, and it comes preloaded with Navionics+ charts, providing coverage across both US coasts, Hawaii and Alaska, Bahamas, both Canadian coasts, all the Great Lakes details, plus 18,000 US Inland Lakes (approx. 2,500 lakes containing 1 ft contour) as well as all Canadian lakes found on the HotMaps Canada product..

A superior fishfinder at a great cost. 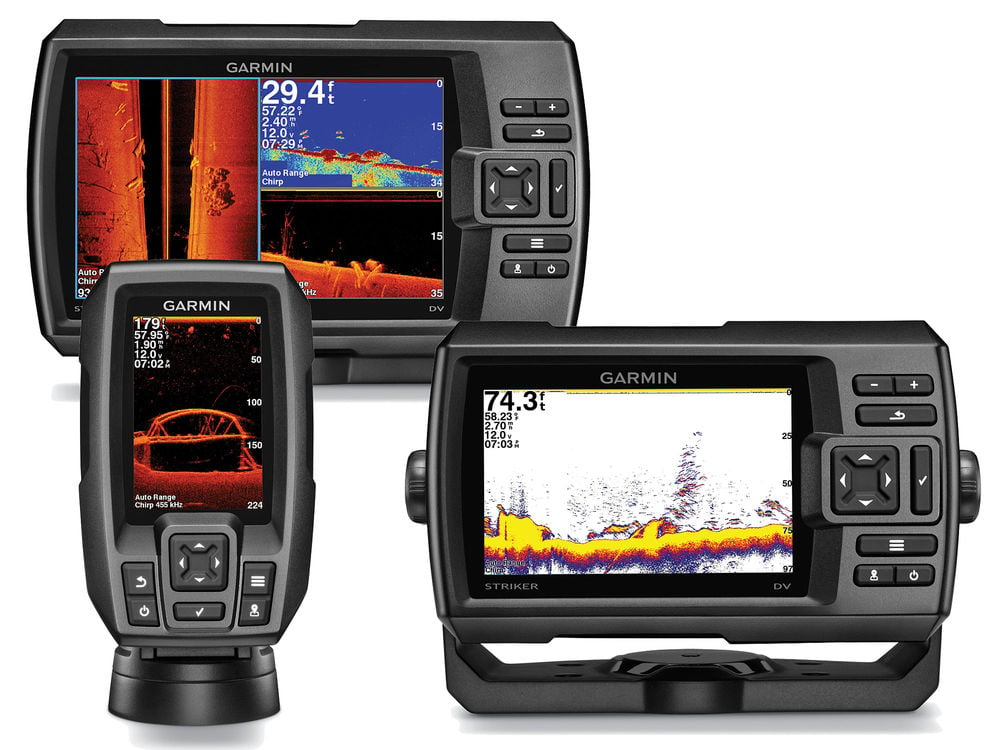 The Garmin Striker series packs a whole lot of fishfinding power (and more) into some cutting-edge, yet affordable marine electronics. These are the entry level Garmin fishfinders – but with brilliant sonar and unmatched fishing features, there’s nothing “beginner” about them.

Instead of just on,e single frequency, Garmin Striker’s CHIRP sonar sends a continuous sweep of frequencies, and interprets them on return, creating much better target separation, easily allowing you to know the number and size of the fish in the water below and around you. CHIRP sonar is what is wanted by fishermen nowadays, and it is available across the entire Striker product line.

The Garmin Striker DV models come with DownVü, allowing you to perfectly see objects and structures in a near photographic image below the boat, and with the Garmin Striker 7sv model including SideVü, as far as 750 feet out to the side of your boat. Split-screen options allow you to simultaneously see different views. These functions work both in fresh and salt water.

With a built-in, high-sensitivity GPS, the Striker fishfinders allow you to keep track of your favorite fishing spots, docks, ramps, etc., in order to return to them on a later date, as well as track your speed and more.

IPX7 waterproof construction and sunlight readable displays make this powerful fishfinder perfectly able to withstand even the harshest of marine environments. The Striker series fishfinders come with everything you need, including a trolling-motor and transom transducer and mounting hardware.

If You Like Fishing With Some Serious Firepower, Try The GARMIN Panoptix All-Seeing Sonar 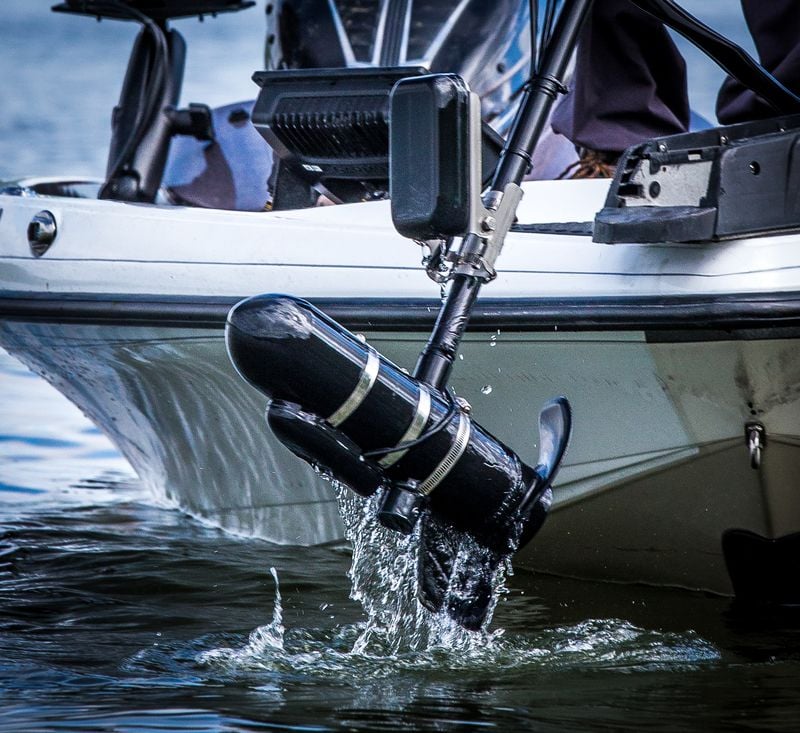 The newest game-changing technology for fishermen is the Panoptix All-Seeing Sonar. This same technology played a huge role during Scott Martins’s 2015 FLW Tour Angler of the Year title run, and helped many other professional fishermen to cash in.

Several Panoptix models have been released, making the technology available for all types of anglers, from entry level to professional. We carry the Panoptix PS30 and PS60 in our marine store, under Garmin Fishfinders and Sonars.

The Garmin Panoptix is a compact transducer, perfect for a trolling motor because of it’s lighter weight and smaller size. Some Panoptix models (the PS21 and PS31) come with LiveVü Forward which shows an image of moving targets toward or away from the boat (ahead of and around their boat, up to 100 feet), even while stationary, in real time.

With a Panoptix on board, fishermen can see real-time sonar imagery at video-like speed, rather than showing historical data like traditional sonars. 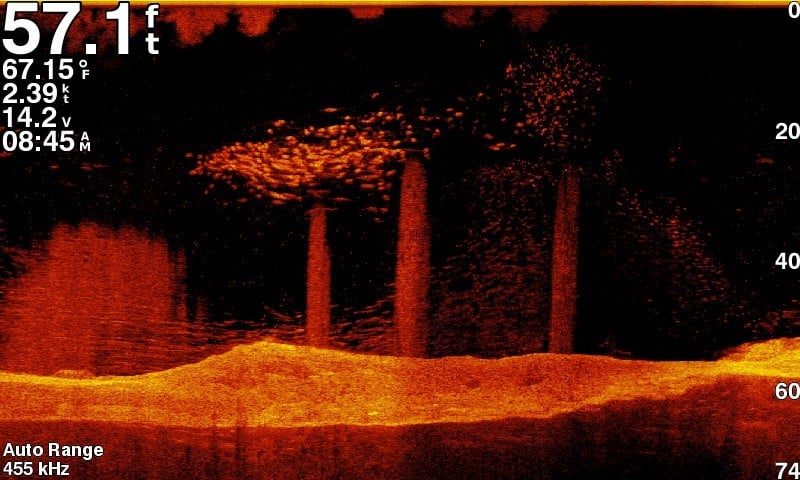 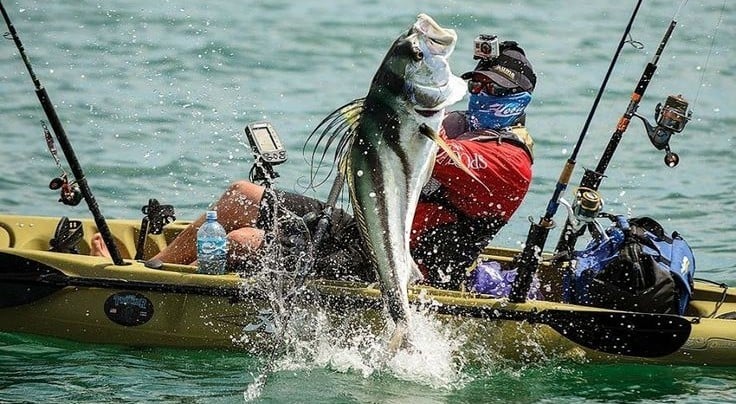 If you are in the market for fishing electronics, depending on your budget, and level of seriousness in the sport (or business!), you may find different products attractive.

If you’d like some personal recommendations, we are experts in the area of marine electronics and accessories, and would be happy to provide suggestions for your specific boat, fishing interests, location, etc. Even up to larger commercial applications, we carry powerful transducers and sonars, as well as Furuno Marine Electronics and Simrad models.