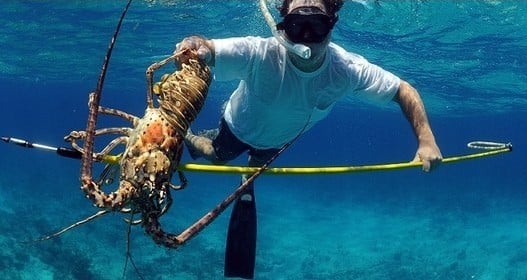 If interested in lobstering in Florida, the regular Florida lobster season extends from August 6th to March 31st – the best time to hit the waters on the hunt for the delicious spiny little creatures.

While there are other parts of the country where you can go lobstering, I will be discussing lobstering in the South Florida area, being that it’s closest to where we are, and lobsters are in abundance down here.

So if you’re up North, or out West, and considering a vacation spot where you can enjoy some diving or marine activities, strongly consider coming down here for some crustacean hunting fun! Otherwise, you can use some of the tips below for similar results in your local area!

About Our Friendly South Florida Lobster – The Florida Spiny Lobster 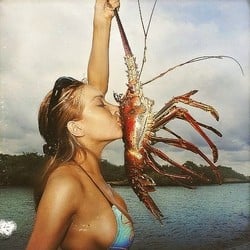 The main difference between the Florida Spiny Lobster and the American or Main Lobster are the front claws.

Florida lobsters are caught for their tail meat, while Maine lobster is known for its claw and tail meat.

Young larvae and juvenile Florida lobsters stay in shallow waters to hide from predators. One of their most common predators is the Lionfish, a foreign, invasive species which was unnaturally introduced to the Atlantic Ocean, most likely from aquarium owners dumping them in the sea. A Lionfish can consume 20 baby lobsters in just 30 minutes. As Florida lobsters grow, their predators grow along with them, to eels and sharks.

In the fall and winter, as waters cool, Florida Lobsters go to deeper waters. As the shallow waters warm in summer months, Lobsters return to more shallow areas. Florida lobsters are said to be descendants of the Caribbean lobster, due to large water circulation patterns and weather patterns transporting the lobster larvae long distances. When considering dates and times for lobstering in Florida, you should take all of this into consideration.

Where to Find Florida Lobster

When lobstering in Florida, look no further than the Florida Keys.

The best lobster spots are located on the Gulf (Bay) side of the Middle Keys just north of Marathon, south of Long Key and the 7 Mile Bridge. This is due to the abundant natural Lobster Habitat found in the area including:

The rocks surrounding the bridges of Duck Key are an especially popular spot for catching lobster. There may be 10 other groups there, but there will be more than enough lobster to go around.

A great tip according to FloridaLobstering.com is to find a rocky bottom in 5 – 15 feet water, and troll around with two ski ropes pulling two guys behind the boat. If someone finds a lobster, drop off the rope, and have the boat circle back. Then mark the spot with the GPS and come back at a later time, or go right ahead and go for the catch.

Lobsters like to hide under rocks and coral, and you can often spot their antennas sticking out. Even if you don’t see the antennas, and it looks like a particularly nice hiding spot (you just get that gut feeling), go a bit lower and investigate, you may just find a little hidden lobster lair. 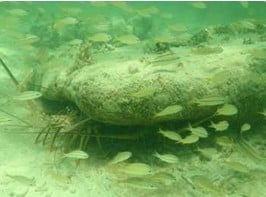 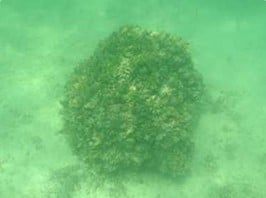 And if you find a great spot, that is not yet known by others… keep it to yourself and return year after year!

How to Catch Caribbean and Florida Spiny Lobster

Essential gear for lobstering in Florida:

First and foremost, it’s important to know how Spiny Lobsters behave and move = Florida Spiny Lobsters will move forward very slowly and cautiously. However, if frightened they will use their tail to shoot backward very rapidly.

If hunting with a net, you will want to take advantage of this natural reaction.

When hunting with a net, use a “tickle stick” to gently tap the lobster on the tail. This will cause it to walk forward. If not, you can be a bit more aggressive and use a sweeping motion to try and force it out of it’s hole.

Another option is to catch the lobster with a snare, a much quicker and more direct method (Hookah Dive South Florida – Lobster):

Now that you are a certified, diving lobster hunter, you can’t just go in and snatch up as many lobsters as you’d like… there are limits to this thing.

1) A lobster must have a carapice (it’s “torso” or body if you will) of at least 3 inches. This means it would be at least 2 or 3 years old, and have lived long enough to have reproduced at least one season. You must place the measuring gauge starting at it’s head, between the eyes, and making sure the end of its carapice is longer than the 3 inch marker.

The lobster must be measured in the water, if harvested while hookah diving or diving in general.

2) You can only catch 6 lobster a day. Six (6) per recreational harvester per day

3) Egg-bearing (bearing) female lobsters must be left alone. Eggs are an orange, yellow, brown, or red mass found covering the underside of the lobster’s tail

For more information on the Florida rules and regulations for lobstering, see here…

Lobstering in Florida and Diving Hookahs – a Perfect Match 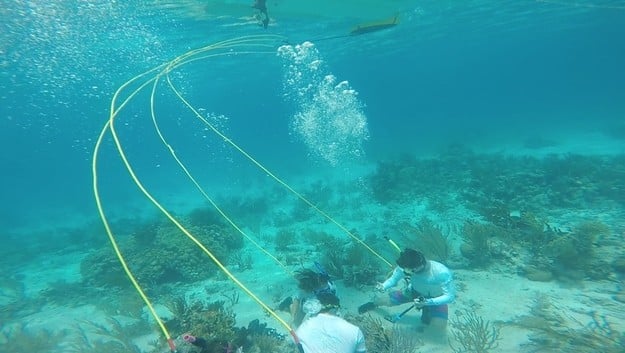 One suggestion to help with this is to consider getting a diving hookah. With diving hookahs, as opposed to traditional scuba gear, you:

As to lobstering in Florida with a diving hookah, see the feedback from several members of the popular boating forum, The Hull Truth, especially about their preference for Brownies:

“I went the SCUBA route in 74. About 4 years ago I got a Brownie 280. For lobstering and shallow reefs you can’t beat it. No tanks to trip over, running back for fills, a gallon of gas will keep up to 3 people under longer than most want to be.”

“You are more than welcome to try the airline, but Brownie’s are the industry innovator, and the one I’d be willing to bet my life on (that is what you are doing)…and don’t get me started on Joe Sink personally. Who want’s to buy boating life support from a guy named “Sink” anyways? Brownie’s has been making these compressors since 1969. Airline…2000, maybe.

I’ve used them a whole lot, and wish I had one down in the Keys with me now…they are awesome for the Florida reefs. You can get lobster all day long on 15′ reef and 1 tank of gas.”

“I love my brownie third lung. Awesome in the keys. 30 is as deep as I ever want to go… In my opinion that is the only way to hunt.”

“…you’re right it is the only way to hunt, whether its lobsters or shooting fish.”

“I have been diving worldwide for 44 years. The last two years I have been using a Brownies Third Lung here in the TCI. I love it. Most of the good stuff is shallower than 40 ft. I have three 60 ft. hose/regulators, so I can dive with a couple guests and keep an eye on them. The Brownies uses a little Robin engine, and it will run about 4 hours on a half gallon of gasoline.

Not only are the diving hookahs great for recreational diving and lobstering, but can be used for general shallow water work on your boat, such as cleaning props and installing zincs. 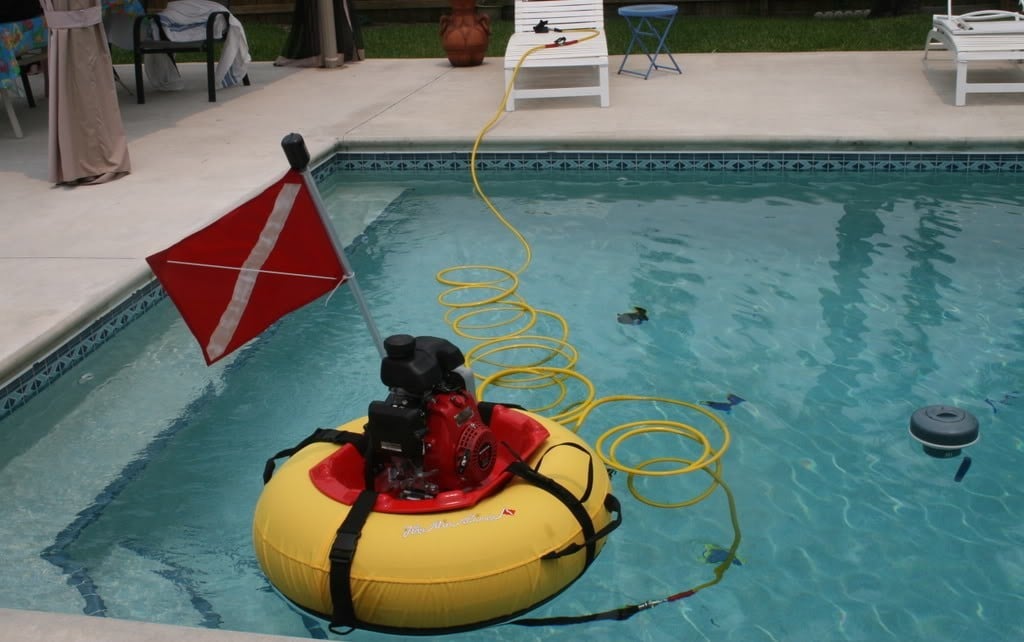 Some things you can do to get comfortable with the Brownie’s Diving Hookah is use it in a pool, especially if you are going to have your kids use it.

Go over with your friends & family what should be done if the compressor DOES quit: hold the breath you have, and let it out slowly as you surface. Just like with most things diving related, panic is the biggest enemy.

Be patient getting into and out of the water or you’ll spend a lot of time getting things straightened out before you can dive.

Where to Buy Hookah Diving Systems?

Should you have any questions on diving hookahs, lobstering in Florida or anything else boating, we’re here!

Have a good one!!