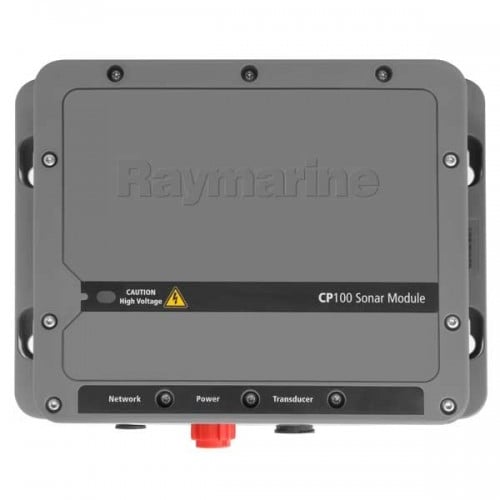 By buying this product you can collect up to 54 Citimarine points. Your cart will total 54 points that will be converted into a voucher of $5.40 towards your next purchase! Must be logged in to collect points.

The CP100 Sonar Module brings CHIRP DownVision technology to Raymarine’s multi-function displays. The CP100’s delivers a photo-like view of the world beneath your boat. It does so with two independent sonar channels. The first is a high frequency range that allows you to image bottom structure with amazing detail, while the second is a lower frequency range that is optimized for imaging fish using high contrast sonar resolution. Applications:

Coastal Fishing: With depth performance up to 600', the CP100 is a great choice for coastal and bay fishing. Image wrecks with unmatched fidelity and use the second CHIRP channel to simultaneously target bait and predators.

Unlike conventional imaging sonars that transmit a single frequency with each pulse, the CP100’s DownVision sonar uses CHIRP technology to transmit across a wide spectrum of sonar frequencies, the result is much higher resolution, photo-like, sonar images.

*2 Year Standard Raymarine Warranty. Extend into 3 Year Warranty by Registering Product With Raymarine. Your Proof of Purchase documentation is important. Please keep it in a safe place. If you need a warranty service your proof of purchase will be required.