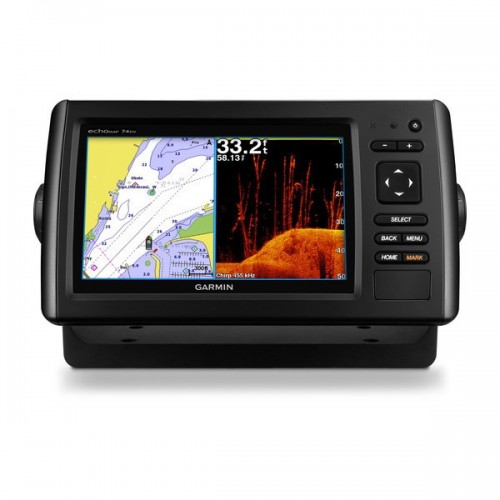 By buying this product you can collect up to 59 Citimarine points. Your cart will total 59 points that will be converted into a voucher of $5.90 towards your next purchase! Must be logged in to collect points.

The easy-to-install, easy-to-use 6-inch Garmin EchoMAP Plus 64cv chartplotter/sonar como includes, high wide CHIRP sonar and Garmin CHIRP ClearVü, the clearest scanning sonar on the water. The EchoMAP 64dv includes Quickdraw Contours software to instantly create your very own HD maps with 1-foot contours as you fish. Internal 5 Hz GPS can update position and heading 5 times per second. It even provides NMEA 2000® support for engine data, sensors, autopilots and more. Cords plug directly into the mount, allowing you to quickly install and remove your device from power and mount. Transom and trolling motor mounts included. 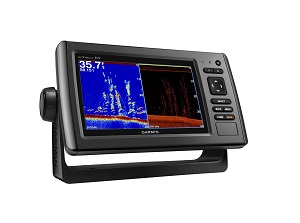 The built-in sonar of the 64cv comes with CHIRP sonar, the top-of-the-line sonar technology for fishing and recreational use. It seperate targets with extreme precision due to the extra energy placed on the target (much more than traditional sonar).The sonar-recording capability coordinates the timing of the sonar return w/ your boat's position and saves digital information, allowing you to playback on a computer using HomePort™ planning software. Share waypoints and routes between different devices with the data sharing cable. 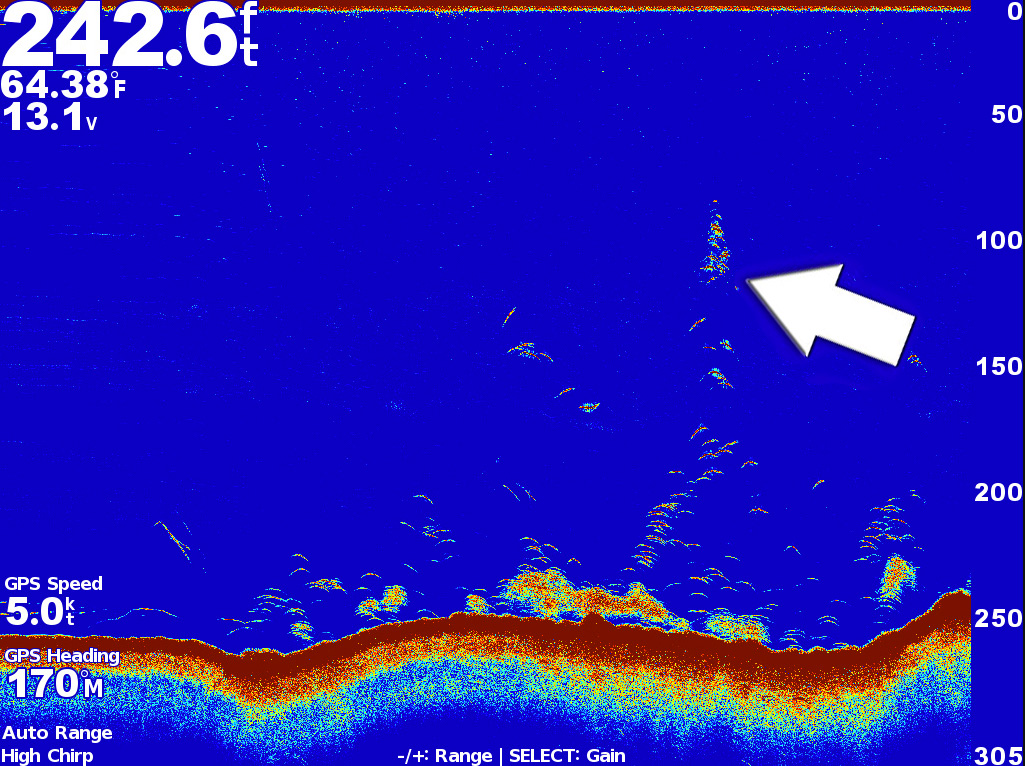 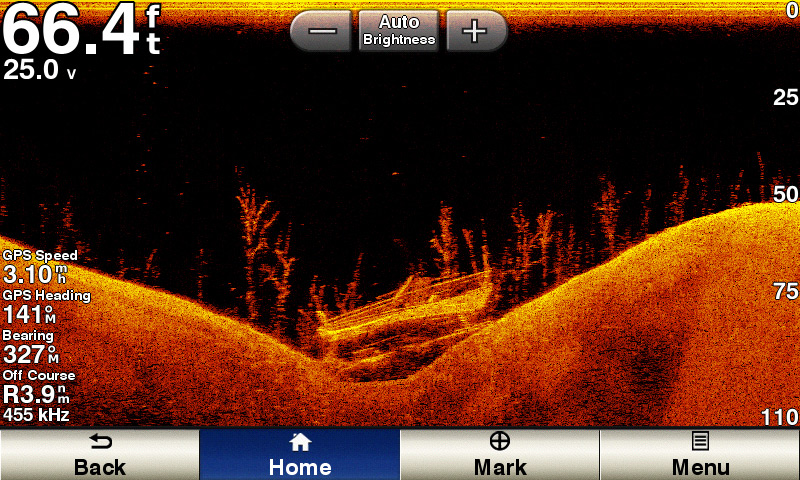 Garmin's EchoMAP 64cv comes preloaded with BlueChart g2 maps of the entire coastal US (East Coast, West Coast, Gulf of Mexico, U.S. & Canadian sides of the Great Lakes). It also includes all U.S. charts for entire coastlines as well as everything available on NOAA charts. In addition to the basic charts, tidal stations, currents, depth contours, IALA symbols and included fishing charts, BlueChart g2 offers smooth transitioning between zoom levels and seamless continuity across chart boundaries. Customize your screen w/ Shallow Water Shading, which allows you to contour shade for all depth contours shallower than what you determine is your safe depth. Fishing charts emphasize bathymetric contours with less visual clutter on the display. And there’s also a choice of standard 2-D direct overhead or 3-D “over-the-bow” map views for easier chart reading and orientation. 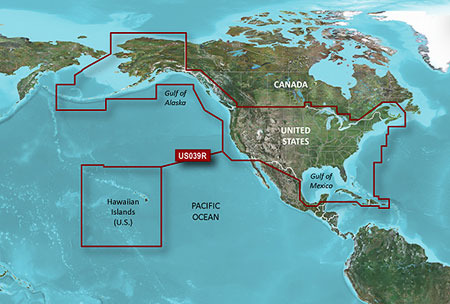 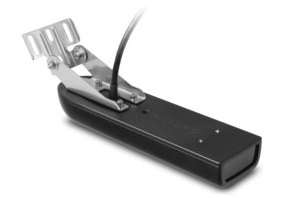 Create Your Own HD Maps - Keep Them and Share Them!

Quickdraw Contours, already installed on the Garmin EchoMAP 64cv, allows you to crreate your own HD fishing maps on screen with 1-foot contours. Customize the maps as you'd like; they're yours. Keep the data, or share with other friends' Garmin devices. Just continue fishing while Quickdraw creates maps. Have more than 1 sonar device installed? Quickdraw Cotrours will select automatically select the most capable sonar device that will provide the best results for you. 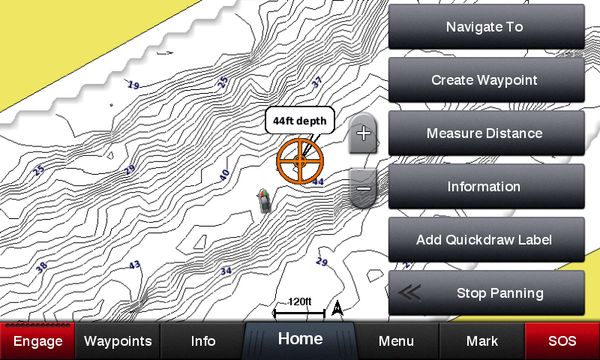 The fast, responsive 5 Hz GPS/GLONASS refreshes your position and heading 5 times per second to make your movement on the screen completely fluid. Quickly and easily drop up to 5,000 accurate waypoints and find your way back to your favorite fishing hot spots.

With LiveVü Forward your boat can be moving or stationary. Wherever your trolling motor is pointed, you will see live images of what is happening under the water. Watch your lure as it sinks, and see its depth and movement as you retrieve it. See it move in relationship to structures in the water. See fish swimming, reacting to your bait; if they attack, you’ll see and feel the hit. Once on the hook, watch the fight on your screen as it happens. With Panoptix LiveVü Forward, you can see it all come to life up to 100 feet away.

Easily Take Your EchoMap with You - Installing and Removal of the 64cv in seconds!

The quick and easy removal of the Garmin EchoMAP 64cv makes keeping it safe a breeze. No messy or complicated plugging and unplugging of wires -- the cords plug directly into the mount. Install and remove your EchoMAP from power and mount in seconds.


Upgrade with The Best Garmin Maps on the Water

Enter your end destination, and the Garmin Auto Guidance technology instantly searches relevant charts to create a safe, virtual path on the display that will avoid low bridges, shallow water and other possible obstructions.

With the enhancement 2.0 Version, you can adjust the Auto Guidance pathway by inserting "via" points that you'd like to stop by along your selected route. You'll be able to easily view hazard points, and even engage your Garmin Autopliot to folow the Auto Guidance route, automatically! Save your plotted paths for future navigation, or save them and take them with you on an SD card! 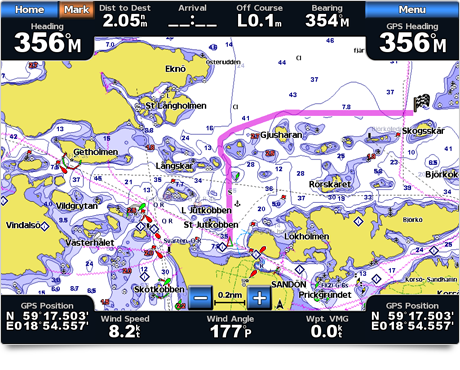 GPX Waypoints Transfer - Transfer all Your Old Waypoints, Tracks and Routes, Even From Other Manufacturer's GPS Devices

Transfer waypoints, tracks or routes from other manufacturer's GPS devices to your Garmin EchoMAP 64cv via industry-standard GPX software formatting. "No waypoint left behind" on your trade-up to the 64cv.

Designate up to 10 different depth ranges each with its own color. Makes it easier to view target depths at a glance. 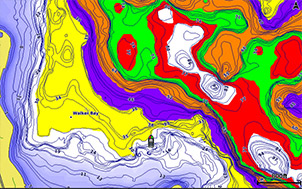 To make commissioning easier and more convenient, you can handle the entire autopilot commissioning process from your chartplotter screen.