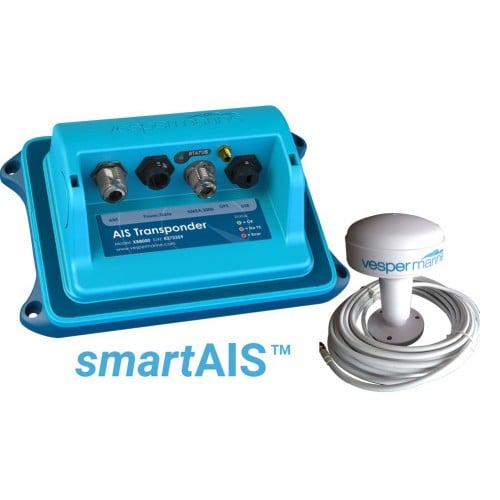 By buying this product you can collect up to 74 Citimarine points. Your cart will total 74 points that will be converted into a voucher of $7.40 towards your next purchase! Must be logged in to collect points.

Rate / write a comment
The XB-8000 AIS Transponder has a built-in WiFi router and an NMEA 2000® & 0183 gateway and integrates AIS, GPS and NMEA information to see safety and navigation on your boat via tablet, mobile device or PC. Includes a powerful external GPS antenna and has a fast 5Hz GPS update rate 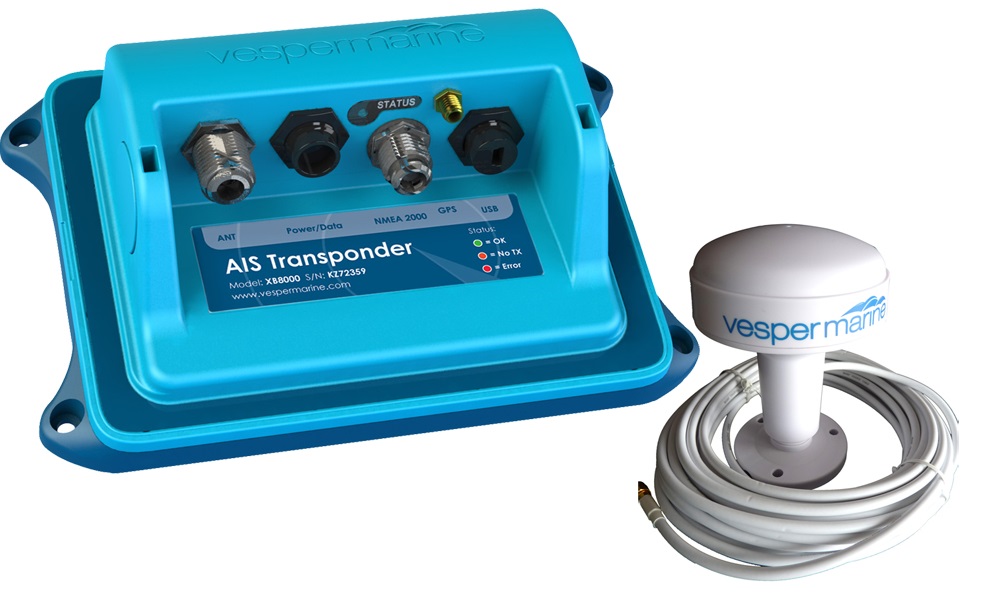 The XB-8000 AIS Transponder has a built-in WiFi router and a NMEA 2000® & 0183 gateway, and integrates AIS, GPS and NMEA information to see safety and navigation on your boat via tablet, mobile device or PC. Includes a powerful external GPS antenna and has a fast 5Hz GPS update rate

WatchMate XB-8000 is the world's only black box transponder with built-in smartAIS alarms. Get alerted with the external audible alarm included with the XB-8000 that sounds if it detects a risk in case of potential collisions, dragging anchor or man overboard situations. The alarm sounds even if your MFD or mobile device is switched off.

WatchMate XB-8000 is a Class B AIS transponder with a two channel parallel receiver and transmitter. It transmits your vessel position and details and receives the same kind of information from other vessels with AIS transponders.

Vesper Marine is compatible with all the leading brands of marine equipment and MFDs including Raymarine, Garmin, Furuno, Simrad and many more. 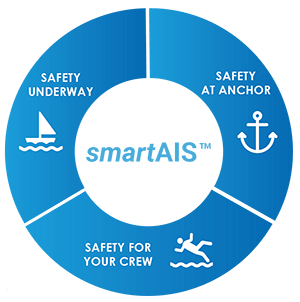 Unlike normal AIS which send and receive AIS data, WatchMate XB-8000 has smartAIS which is an active system with smart alarm logic that alerts you rapidly to potential dangers.

- Safety Underway. This alerts you when smartAIS detects a potential collision.
- Safety at Anchor. If your anchor drags, smartAIS will let you know immediately.
- Safety for your Crew. If someone falls overboard, smartAIS not only alerts you, it also provides their       location so you can pick them up quickly.

It means you can focus on enjoying your time on the water, knowing smartAIS is always keeping watch in the background and is ready to alert you the moment it detects an unwanted event. 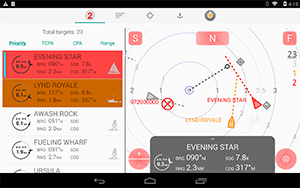 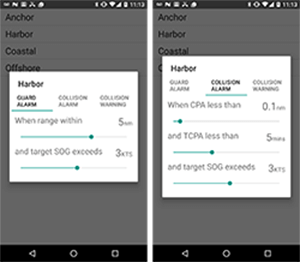 WatchMate XB-8000 proactively alerts you when you have potential collision situations.

CPA Alarm
smartAIS computes the closest point of approach and time until CPA. A CPA alarm is triggered if a vessel will come too close in terms of CPA and the alarm is prioritised by TCPA.

Bearing and Range
Computes the bearing and range to each vessel. Bearing can be displayed in magnetic to facilitate easy visual identification using your compass and binoculars. Bearings can alternatively be displayed in true degrees.

Guard Alarm
Sounds alarm if any vessel comes within the specified range. Both CPA alarms and guard alarms may be used together.

Alarm Profiles.
Choose from multiple profiles according to the current situation (Offshore, Coastal, Harbor or Anchored) and the profile defines the distance notifications for alarms. 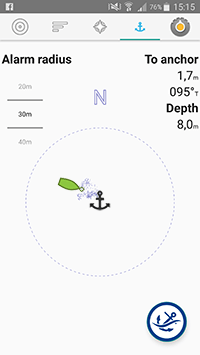 Every boater knows that being at anchor is no guarantee of total safety. In  particular, anchors can drag without those on board being aware. Thanks to Anchor Watch, however, you can be safer and sleep well at night. That’s because Anchor Watch sounds the alarm if you drift outside a zone defined around your anchor position. Activate the anchor watch when you drop the anchor using either a wired switch or your smartphone or smartwatch remotely from the windlass or anywhere on-board.

Breadcrumbs.
XB-8000 plots your position in relation to the anchor and marks your positions over time for easy visual identification if you are dragging. 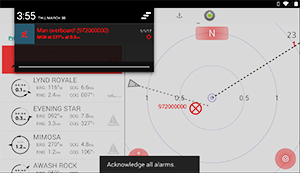 WatchMate XB-8000’s Man Overboard (MOB) alarm sounds the alarm you the instant somebody goes over the side and activates his AIS MOB device. The Alarm clearly identifies the MOB on the display screen and gives you the location, bearing and range of the person for quick retrieval. It also provides continuous updates of position, bearing and range.

WiFi Connectivity Anywhere on Board

WatchMate XB-8000 has built-in Wi-Fi. You can securely connect up to 5 other devices simultaneously. You can have a wireless connection to your laptop, smartphone and tablet.

Connect Wirelessly to Other Devices Using WiFi 802.11 b/g
WatchMate XB-8000 provides dual WiFi configuration as either a secure Access Point supporting up to five other devices simultaneously or connected to an existing router providing WiFi expansion capability to unlimited devices. 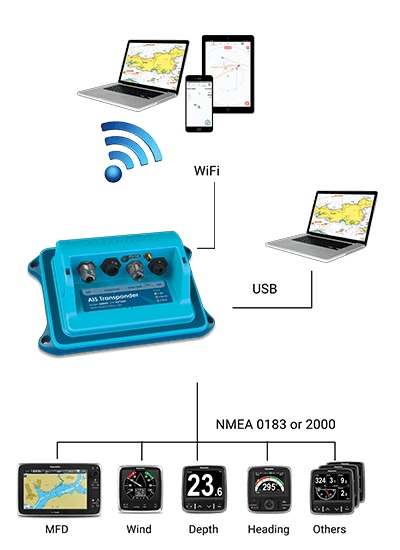 All NMEA 2000 navigation data is combined with GPS and AIS data and sent simultaneously to up to five WiFi devices (tablets, smart phones, computers) as well as computers via USB. Display and use this data in your navigation applications such as NavPlay, iNavX or SEAiq on an iPad. Or use Android apps and Windows or Mac navigation software. 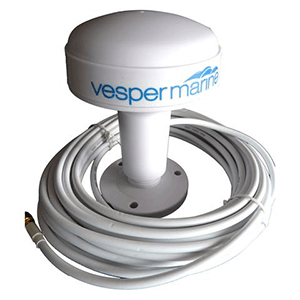 WatchMate XB-8000 is equipped with a fast 5Hz GPS navigation and update rate. This provides greater detail and higher resolution plotting. Displays GPS satellite status and navigation data such as your position, course and speed viewed from the My Vessel screen.

Use it as a source of GPS data on a NMEA 2000 network which means you do not need an additional GPS antenna. View GPS data on your plotter or MFD, with higher resolution and smoother tracks even during high speed maneuvers.

An external GPS antenna connection is provided with the WatchMate XB-8000. 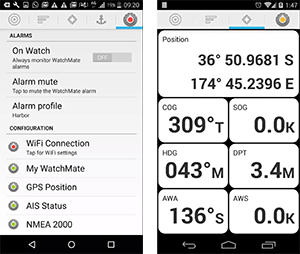 Monitor your WatchMate XB-8000 on a tablet or smartphone using the free Vesper Marine WatchMate App. View and update your vessel information, monitor AIS data, navigation information and GPS status from anywhere on board. Be alerted of potential risk situations to take decisive action. More than a simple mobile AIS viewer, you can also remotely control alerts, alarms and transponder settings.

AIS-equipped vessels can be viewed on an easy to use radar plotting screen.

Instant Target Acquisition
The WatchMate App is the only mobile app with instant identification of other vessels. All other apps and MFDs take time for AIS targets to appear, but the WatchMate app takes advantage of unique NMEA gateway capabilities of your WatchMate XB-8000, so it displays all received vessel information the instant you start the app.

Alarm Setting
Activate the Anchor Watch on your WatchMate XB-8000 from anywhere on your boat. Monitor your position relative to the anchor location on your Apple or Android phone or tablet and receive alarms wherever you are on board.

Third-party apps
In addition, the WatchMate XB-8000 is supported by a growing set of third-party mobile apps and we often post reviews of iOS and Android apps for compatibility and features. Interact with applications such as NavPlay, iNavX, SEAiq and iRegatta on iPad, WatchMate, droidAIS, Sailtracker and iRegatta on Android tablets or your favorite navigation software on computer (Windows or Mac). 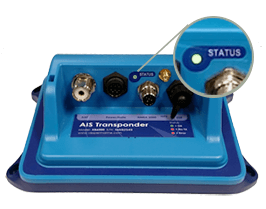 Mounting the XB-6000 is made easy with innovative cable connection points that create low profile installations. As well as being waterproof the XB-6000 also has multiple connection options: NMEA 2000 / 0183 and USB connectivity.

Unlike most other AIS transponders, the XB-6000 is water proof so you can mount it wherever convenient without worrying about water. It is even rated IPx7 which means it is totally submersible to 1m for up to 30 mins!

Multi-color LEDs keep you informed of operational status of the XB-6000 with self diagnosis that shows warnings if AIS, GPS, or antenna are not functioning.

The USB connection can be used to connect the XB-6000 to on-board computers. The XB-6000 provides a GPS and AIS data feed directly to computer-based navigation software. It translates selected NMEA 2000 instrument data and sends that to your computer too. An optional 5m (16') waterproof cable features a locking ring so it can't vibrate out of the back of the XB-6000.